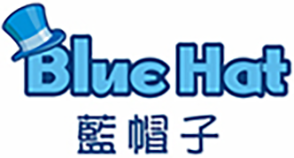 Founded in 2010, Blue Hat’s proprietary technology, product research and development, marketing channels and brand operation are the cornerstones of the business. Blue Hat focuses on the combination of “online” and “offline” activity and the interaction between “entertainment” and “product” to create a high-tech entertainment platform combining mobile games and AR. With the help of computer graphics, motion capture technology, image recognition technology and visualization technologies, Blue Hat accurately “places” virtual objects into the physical world, creating a new and stimulating visual environment for users.

The company has multiple products in development including new generations of four primary product lines and two new product lines.

Blue Hat’s advanced AR technology in interactive entertainment is protected by 178 authorized patents with 44 patents in various stages of the application process.

Another 14 applications for Patent Cooperation Treaty, or PCT, have been filed for international patents. As of March 31, 2019, the company owns 645 copyrights for artwork, 71 registered trademarks and 27 software copyrights.

There has been rapid growth in the toys and games industry in China over the last several years. Total retail sales of toys and games in China soared from RMB 111.8 billion in 2012 to RMB 276.5 billion in 2017 with an average annual growth rate of 19.9% in 2017. Blue Hat believes the company is well positioned with little competition as the toy industry rapidly shifts toward intelligent and interactive toys and games. Retail sales of electronic toys grew at 24% annually in 2017 while that of traditional toys grew at 7%.

Director and CEO Xiaodong (Sean) Chen has over 20 years of experience creating, developing and producing toys and games related products. Chen earned his EMBA from Renmin University of China and has been chairman of the board of directors and general manager of Fujian Blue Hat Interactive Entertainment Technology Ltd. since August 2015.

CFO and Director Caifan He, who has over 20 years of financial accounting and taxation experience, earned a degree in finance from Hunan University of Finance and Economics. He has served as director, deputy general manager and financial controller of Fujian Blue Hat Interactive Entertainment Technology Ltd. since August 2015.