Energy Fuels Inc. (NYSE American: UUUU) (CSE: EFR), based in Lakewood, Colorado, is the country’s largest producer of uranium and the leading conventional producer of vanadium, both designated by the U.S. government as critical minerals. Energy Fuels also began production of rare earths in 2021 at a stage more advanced than any other U.S. company.

As the leading U.S. diversified uranium miner, Energy Fuels’ uranium production portfolio stands apart in the world. Energy Fuels has more uranium production facilities, more production capacity, and more in-ground resources than any other company in the United States. In fact, the company’s assets have produced over one-third of all U.S. uranium over the past 15 years and is uniquely positioned to increase production to meet new demand. 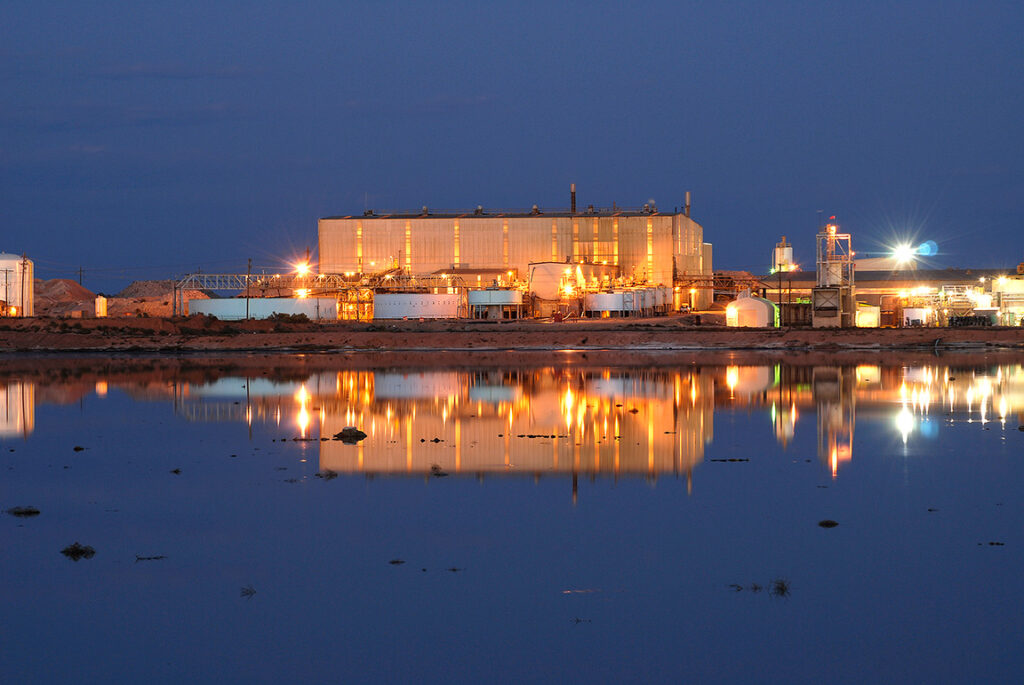 In addition to being the largest uranium miner in the U.S., Energy Fuels’ overall portfolio also includes a pipeline of high-quality, large-scale exploration and development projects that are permitted or are in advanced stages of permitting, as well as an industry-leading U.S. NI 43-101 Mineral Resource portfolio.

FACTOID: Energy Fuels has led industry efforts over the past two-plus years to get the U.S. government to recognize the importance of domestically produced uranium, including the 2018 – 2019 Uranium Section 232, the ongoing Nuclear Fuel Working Group and the recently announced creation of the U.S. strategic uranium reserve. The U.S. is by far the largest consumer of uranium in the world, yet we import almost all of our requirements; Energy Fuels aims to change that.

Multiple studies in top scientific journals have shown that nuclear power is cleanest and most economical way to produce reliable electricity as worldwide demand continues to soar. Nuclear power is presently the only available and affordable low-carbon power source that can meet both current and future baseload electricity demands while simultaneously reducing air pollution and mitigating climate change. U.S. nuclear power plants currently generate nearly 20% of the nation’s electricity overall and 55% of its carbon‐free electricity and even a modest increase in electricity demand would require significant new nuclear capacity by 2025. According to the World Nuclear Association (WNA), there are currently 443 operable reactors, with another 57 units under construction and 426 in various stages of planning; in addition, the WNA has identified a potentially massive supply/demand gap through 2040 of 1 billion pounds. These factors among others are expected to significantly drive increased demand for uranium. 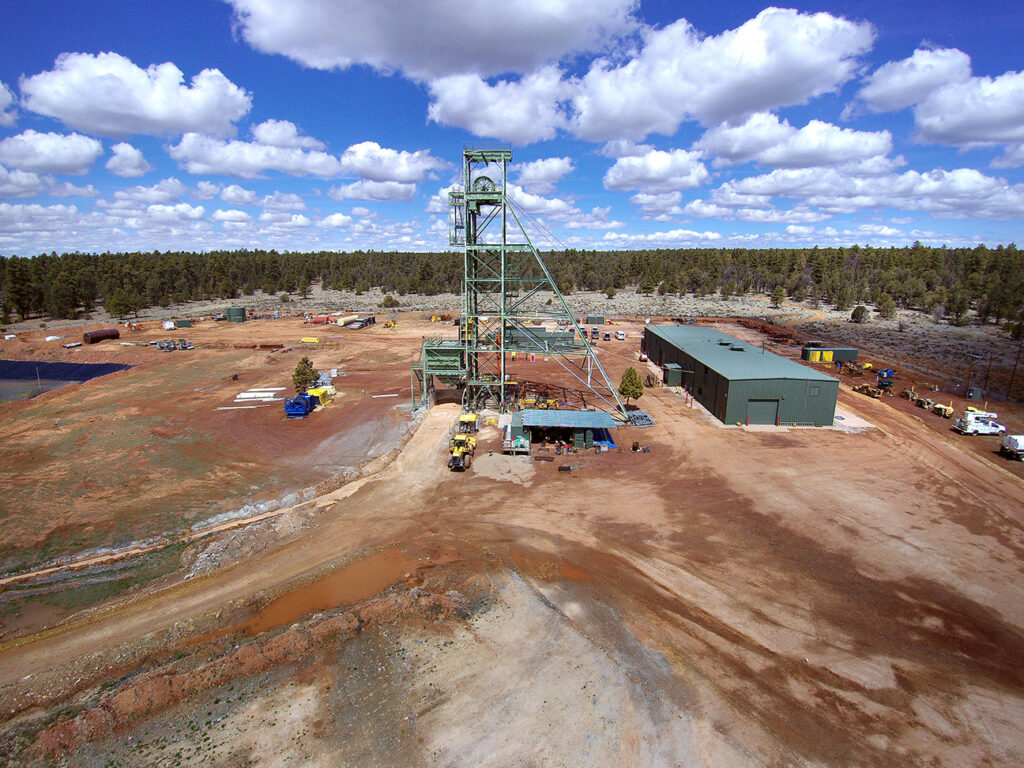 Energy Fuels also produces vanadium as a byproduct of uranium production. Vanadium is designated a critical mineral, essential to the economic and national security of the United States. Energy Fuels was the largest producer of vanadium in the U.S. in 2019, and has significant high-grade, in-ground vanadium resources, as well as a separate high-purity vanadium production circuit at their White Mesa Mill, which is also the only conventional vanadium mill in the country. Crucial for use in the steel, aerospace, and chemical industries, vanadium plays a critical role in the production of high-strength and light-weight metallic alloys and demand is expected to increase across the globe. Energy Fuels has several fully permitted and developed standby mines containing large quantities of high-grade vanadium, along with uranium, including:

Vanadium has also gained increased attention as a catalyst in next-generation high-capacity, “community-scale” batteries used for energy storage generated from renewable sources. Demand is only expected to grow as this market expands. With recent upgrades in its vanadium production operations, in 2019 Energy Fuels produced 1.8 million pounds of the highest purity (99.7%) vanadium in the mill’s history and can rapidly adjust production to meet volatile market conditions. Energy Fuels is one of the very few known avenues that provides investors access the vanadium market. 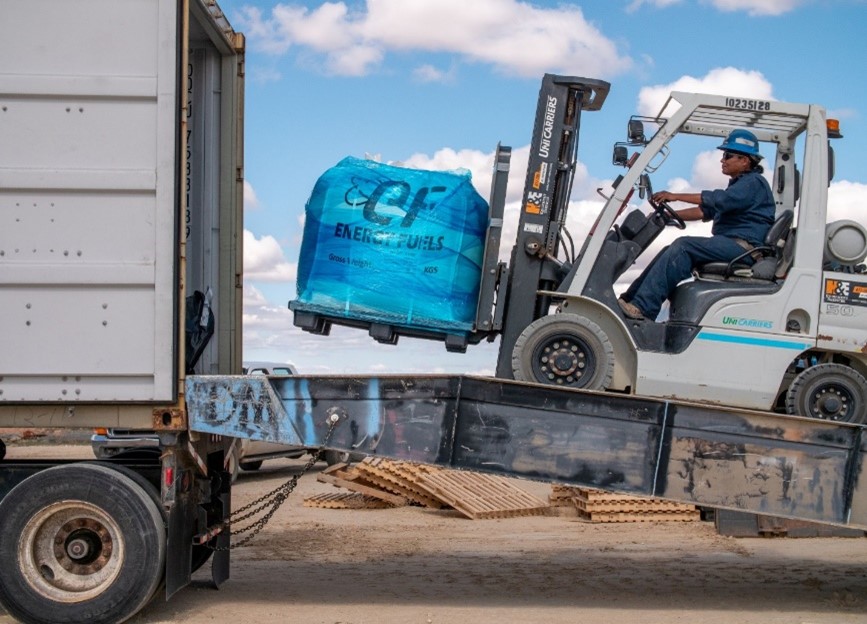 The White Mesa Mill also provides the company with diverse cashflow generating opportunities. Security of supply for Rare Earth Elements (REEs) supporting U.S. military and defense requirements is a major issue today. In 2021, the White Mesa Mill began processing a mineral called monazite, which is widely recognized as one of the most valuable REE-bearing minerals in the world due to excellent distributions of the magnetic REEs needed for electric vehicles (EVs), wind generation and a host of other clean energy and advanced technologies. Monazite also contains uranium and thorium, which processors need special licenses and capabilities to recover and manage.

Monazite is produced as a byproduct of titanium and zircon mines in the U.S. and around the world. Energy Fuels’ White Mesa Mill is recovering the uranium from monazite and selling it for the production of clean, carbon-free nuclear energy. The mill is evaluating recovering the contained thorium for emerging ‘targeted alpha therapy’ cancer treatments, as well as producing a REE product called mixed rare earth carbonate which is ready for the next step in rare earth refining: separation. At the current time, no other U.S. company is producing a rare earth product ready for separation. Energy Fuels is also in the early stages of installing rare earth separation capabilities at the White Mesa Mill, with the potential to unlock significant revenue generating opportunities.

The White Mesa Mill is also the only facility in North America licensed and capable of recycling alternate feed materials (AFMs). AFMs are essentially low-level waste materials that contain recoverable quantities of natural (or unenriched) uranium. The Company typically generates between $5 and $15 million per year from AFM recycling. Finally, Energy Fuels is seeking to become involved in the cleanup of legacy Cold War era uranium mines in the Four Corners region of the U.S., including on the Navajo Nation. The U.S. Environmental Protection Agency (EPA) has access to over $1.5 billion for the cleanup of just a fraction of the sites on the Navajo Nation. The White Mesa Mill is fully licensed to receive much of this material, we are one of the government’s lowest cost options, and we have the ability to recycle the material and produce usable uranium from it.

On September 16, 2021, Energy Fuels announced the establishment of the San Juan County Clean Energy Foundation, a fund specifically designed to contribute to the communities surrounding Energy Fuels’ White Mesa Mill in Southeastern, Utah. In tandem with the announcement, Energy Fuels deposited $1 million into the foundation and detailed plans to provide ongoing annual funding equal to 1% of White Mesa Mill’s future revenues, providing funding to support the local economy and local priorities. The foundation will focus on supporting education, the environment, health/wellness, Tribal initiatives and economic advancement in the City of Blanding, San Juan County, the White Mesa Ute Community, the Navajo Nation and other area communities.

“The communities that surround our facility deserve to share in the benefits of the Mill’s clean energy future,” Mark Chalmers, CEO of Energy Fuels, stated in the news release. “The very heart of our business – uranium and rare-earth production and recycling – helps us play a big part in addressing global climate change, reducing air pollution, and making the world a cleaner and healthier place. We see San Juan County as becoming a critical minerals hub for the U.S., and we believe the Foundation is truly the best way to make an impact and difference in the lives of those who work alongside us as we pursue these goals.”

Mark S. Chalmers, President and CEO
Mark S. Chalmers is the president and chief executive officer of Energy Fuels, a position he has held since Feb. 1, 2018, following his role as chief operating officer of Energy Fuels from July 1, 2016 – Jan. 31, 2018. From 2011 to 2015, Chalmers served as executive general manager of Production for Paladin Energy Ltd., a uranium producer with assets in Australia and Africa, including the Langer Heinrich and Kayelekera mines where, as head of operations, he oversaw sustained, significant increases in production while reducing operating costs. He also possesses extensive experience in in situ recovery (“ISR”) uranium production, including management of the Beverley Uranium Mine owned by General Atomics (Australia), and the Highland mine owned by Cameco Corporation (USA). Chalmers has also consulted to several of the largest players in the uranium supply sector, including BHP Billiton, Rio Tinto, and Marubeni, and until recently served as the chair of the Australian Uranium Council, a position he held for 10 years. Chalmers is a registered professional engineer and holds a Bachelor of Science in Mining Engineering from the University of Arizona.

W. Paul Goranson, COO
W. Paul Goranson is the chief operating officer for Energy Fuels. Goranson has 30 years of mining, processing and regulatory experience in the uranium extraction industry that includes both conventional and in-situ recovery (“ISR”) mining, and he is a registered professional engineer. Prior to the acquisition by Energy Fuels of Uranerz Energy Corporation, Goranson served as president, chief operating officer and director for Uranerz, where he was responsible for operations of the Nichols Ranch ISR Uranium Project. In addition to those duties, he also managed uranium marketing, regulatory and government affairs, exploration and land. Prior to joining Uranerz, Goranson served as president of Cameco Resources, where he led the operations at the Smith Ranch-Highland, Crow Butte and North Butte ISR uranium recovery facilities. Goranson also served as vice president of Mesteña Uranium LLC, and he has served in senior positions with Rio Algom Mining, (a subsidiary of BHP Billiton), and Uranium Resource Inc. Goranson has a Bachelor of Science in Natural Gas Engineering from Texas A&I University, and a Master of Science in Environmental Engineering from Texas A&M University-Kingsville.

David C. Frydenlund, CFO, General Counsel, Corporate Secretary
David C. Frydenlund is chief financial officer, general counsel, and corporate secretary of Energy Fuels. His responsibilities include oversight of all legal matters relating to the company’s activities. His expertise extends to NRC, EPA, state and federal regulatory and environmental laws and regulations. From 1997 to 2012, Frydenlund was vice president of regulatory affairs, general counsel and corporate secretary of Denison Mines Corp., and its predecessor International Uranium Corporation (“IUC”). He also served as a director of IUC from 1997 to 2006 and CFO of IUC from 2000 to 2005. From 1996 to 1997, Frydenlund was vice president of the Lundin Group of international public mining and oil and gas companies, and prior thereto was a partner with the Vancouver law firm of Ladner Downs (now Borden Ladner Gervais) where his practice focused on corporate, securities and international mining transactions law. Frydenlund holds a bachelor’s degree in business and economics from Simon Fraser University, a master’s degree in economics and finance from the University of Chicago and a law degree from the University of Toronto.

Curtis H. Moore, Vice President of Marketing and Corporate Development
Curtis H. Moore is the vice president of Marketing and Corporate Development for Energy Fuels. He oversees product marketing for Energy Fuels, and is closely involved in mergers & acquisitions, investor relations, public relations, and corporate legal. He has been with Energy Fuels for over 12 years, holding various roles of increasing responsibility. Prior to joining Energy Fuels, Moore worked in multi-family real estate development, government relations and public affairs, production homebuilding, and private law practice. Moore is a licensed attorney in the State of Colorado. He holds Juris Doctor and MBA degrees from the University of Colorado at Boulder, and a Bachelor of Arts dual degree in Economics-Government from Claremont McKenna College in Claremont, California.

The ‘Internet of Things’ market is expected to reach a value of between $5.5 trillion and $12.6 trillion by 2030, from $745 billion in 2019, driven by contributions from both businesses and consumers SPYR Inc., through its subsidiary Applied Magix Inc., is considering aligning its interests to tap into this anticipated rapid growth The company […]