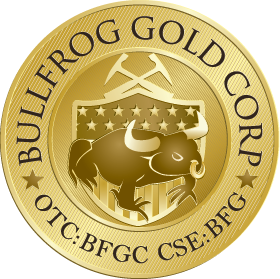 Bullfrog Gold Corp. (CSE: BFG) (OTCQB: BFGC) (FSE: 11B) is a Delaware corporation engaged in the acquisition, exploration and development of gold and silver properties in the United States. The Company controls strategic lands with established 43-101 compliant resources in one of the most exciting gold exploration areas in the United States. The Bullfrog Gold Project (“Project”) includes a lease/option on much of the lands where Barrick Bullfrog Inc., a subsidiary of Barrick Gold Corp., produced more than 2.3 million ounces of gold and 2.49 million ounces of silver from 1989 to 1999. The Project is located within the prolific Walker Trend about 125 miles northwest of Las Vegas, Nevada.

Gold Rush in the Bullfrog Territory

The area around Beatty, Nevada has now attracted AngloGold Ashanti, Kinross Gold, Corvus Gold, Coeur Mining as well as the Company and Waterton. In this regard, Northern Empire Resources Corp’s property located a few miles east of the Project was acquired by Coeur Mining in October 2018 for C$117 million, implying a valuation of C$134/oz of inferred resources. As of today, the Company is trading at a significant discount to the valuation at which Northern Empire was purchased (http://nnw.fm/9NaaN), thereby highlighting the Company’s value proposition for investors.

Bullfrog Gold Corp. raised C$2 million in January 2020 through a private placement of shares priced at C$0.13/share plus a one-half warrant exercisable within two years at C$0.20 on a full warrant basis. The raise was carried out primarily to fund a drill program that started on May 1 (http://nnw.fm/6nZ0m), and was completed on June 6, 2020. Results from drilling 12,520 feet in 25 holes will be released in the coming weeks. The Company subsequently intends to conduct a preliminary financial analysis and complete further drill programs to advance the Project and add value. The financing was subscribed by several influential shareholders, including a former director of Northern Empire, who handled the sale of the company to Coeur Mining, and Eros Resources, the management of which has been involved with several high-profile mining projects and sales in the past.

Gold prices have been on a remarkable run in 2020, rising by $245/oz to $1,760 prior to peaking in early May. Global central banks carried out 144 interest rate cuts thus far in 2020, reducing their rates by a cumulative 5,035 basis points (http://nnw.fm/jzZt0). Meanwhile, the IMF has estimated that global governments have introduced fiscal support measures amounting to over $9 trillion since the start of the COVID-19 pandemic (http://nnw.fm/Or9rI). The resulting weakness in the U.S. dollar and eventual inflationary pressures stemming from these measures prompted Credit Suisse to recently hike their gold price forecasts for the full year to $1,701/oz (from $1,570 previously), while the outlook for 2021 has been raised to $1,800/oz (versus $1,600 previously) (http://nnw.fm/Iqg0X).

David Beling, CEO, President and Director
David Beling is a Registered Professional Mining Engineer with 55 years of diverse experience in areas such as engineering, development, permitting, construction, financing and management of mines and plants and the building and growth of several corporations. His initial employment included 14 years with Phelps Dodge, Union Oil, Fluor, United Technologies, and Westinghouse, followed by 41 years of senior management and consulting with 25+ U.S. and Canadian mining companies. In 2006-2007, he spearheaded an IPO, successfully drove equity raises totaling C$112 million and grew that Company’s market capitalization to $460 million. Beling has served on 14 boards since 1981, including three mining companies distinguished by the TSX Venture Exchange as top-10 performers.

Alan Lindsay, Chairman of the Board
Alan Lindsay is an entrepreneur and businessman who has founded seven companies within the mining and pharmaceutical industries, including Anatolia Minerals Development Ltd., Uranium Energy Corp., Oroperu Mineral, Strategic American Oil and AZCO Mining. Lindsay also developed the strategic vision for the 2011 acquisition and placement of the Project from NPX Metals into Bullfrog Gold Corp.

Kjeld Thygesen, Director
Kjeld is a graduate of the University of Natal in South Africa and has 48 years of experience as a resource analyst and fund manager. In 1972, he joined James Capel and Co. in London as part of its highly rated gold and mining research team before subsequently becoming manager of N. M. Rothschild & Sons’ commodities and Natural Resources Department in 1979. In 1987, he became an executive director of N. M. Rothschild International Asset Management Ltd., before co-founding Lion Resource Management Ltd., a specialist investment manager in the mining and natural resources sector, in 1989. Thygesen has been a director of Ivanhoe Mines Ltd. since 2001 and served as investment director for Resources Investment Trust PLC from 2002 to 2006.

Tyler Minnick, CFO and Director of Administration & Finance
A registered member of the Colorado Society of Certified Public Accountants with over 24 years of experience within the fields of accounting, auditing, and administrative services. Minnick has been engaged with the Company since mid-2011 and previously worked in the finance department of MDC Holdings/Richmond American Homes, one of the largest residential construction companies in the United States.